“We shall drown every foe in their own blood” Vladimir Kareiv 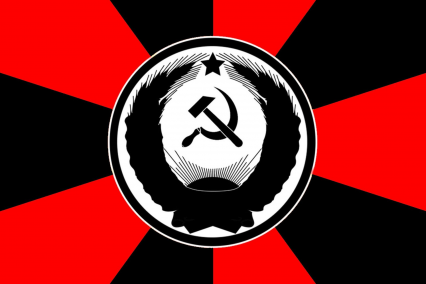 The Communist States of Ajakanistan is a massive, cultured nation, ruled by Vladimir Kareiv with an iron fist, and renowned for its ubiquitous missile silos, zero percent divorce rate, and compulsory military service. The hard-nosed, cynical population of 4.287 billion Ajaks are ruled without fear or favor by a psychotic dictator, who outlaws just about everything and refers to the populace as "my little playthings."

The large, corrupt, socially-minded, well-organized government juggles the competing demands of Defense, Law & Order, and Education. It meets to discuss matters of state in the capital city of Zheleboksarsk. The average income tax rate is 88.1%, and even higher for the wealthy.

The frighteningly efficient Ajaki economy, worth 689 trillion Ajaki Rubles a year, is driven entirely by a combination of government and state-owned industry, with private enterprise illegal. However, for those in the know, there is a large, well-organized, broadly diversified black market in Arms Manufacturing, Information Technology, Tourism, and Book Publishing. The private sector mostly consists of enterprising ten-year-olds selling lemonade on the sidewalk, but the government is looking at stamping this out. Average income is an impressive 160,754 Ajaki Rubles, and distributed extremely evenly, with little difference between the richest and poorest citizens.

Preschools put children down for naps with milk, cookies, and a gruesome story of vengeance, churches across the land are hurriedly installing auto-tune for their choirs, forty-year-old men are asked for their ID before watching the latest pony cartoon movies, and concussed White Tailed Eagleball players cannot remember their lineup position. Crime, especially youth-related, is totally unknown, thanks to a very well-funded police force and progressive social policies in education and welfare. Ajakanistan's national animal is the White Tailed Eagle, which soars majestically through the nation's famously clear skies.

Ajakanistan is ranked 107,739th in the world and 312th in The League for Largest Insurance Industry, scoring 2,037.56 on the Risk Expulsion Effectiveness Rating.

Most Recent Government Activity: 10 minutes ago

The Kingdon of Sweden,