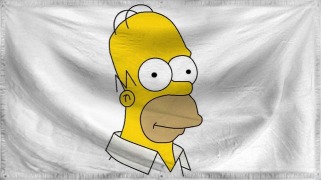 The Republic of Ammanies is a colossal, efficient nation, ruled by Homer Simpson with an even hand, and notable for its barren, inhospitable landscape, vat-grown people, and daily referendums. The hard-nosed, hard-working, democratic, humorless population of 6.957 billion Ammaniesians have some civil rights, but not too many, enjoy the freedom to spend their money however they like, to a point, and take part in free and open elections, although not too often.

The relatively small, corrupt government juggles the competing demands of Education, Industry, and Administration. It meets to discuss matters of state in the capital city of Springfield. The average income tax rate is 66.8%, and even higher for the wealthy.

The frighteningly efficient Ammaniesian economy, worth a remarkable 2,539 trillion Dollarydoos a year, is broadly diversified and dominated by the Information Technology industry, with significant contributions from Book Publishing, Retail, and Arms Manufacturing. Black market activity is rampant. Average income is an amazing 365,039 Dollarydoos, and evenly distributed, with the richest citizens earning only 2.8 times as much as the poorest.

Freighter lifeboats have been replaced by state of the art marker buoys so divers can recover the cargo after they sink, science centers and state of the art laboratories are ubiquitous, children who can't memorize their multiplication tables are sent to the mines, and parents often ask to see a credit report before lending money to their own children. Crime is totally unknown. Ammanies's national animal is the Spider Pig, which teeters on the brink of extinction due to widespread deforestation, and its national religion is None.

Ammanies is ranked 4,543rd in the world and 9th in NationStates for Most Avoided, scoring 517.34 on the Kardashian Reflex Score.

Most Recent Government Activity: 73 minutes ago