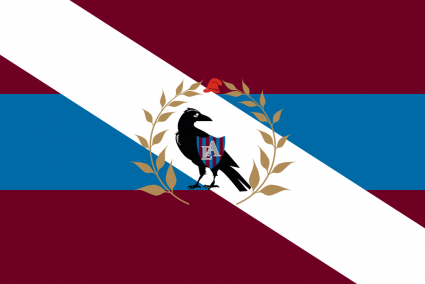 The Holy Blue Errepublika of Auskerria is a massive, socially progressive nation, ruled by Frantzisko Iturburua with a fair hand, and remarkable for its national health service, public floggings, and otherworldly petting zoo. The hard-working, democratic population of 4.345 billion Auskerrians live in a state of perpetual fear, as a complete breakdown of social order has led to the rise of order through biker gangs.

The medium-sized, outspoken government juggles the competing demands of Education, Industry, and Healthcare. It meets to discuss matters of state in the capital city of Aintzira Urdina. The average income tax rate is 39.9%.

The frighteningly efficient Auskerrian economy, worth 418 trillion Vaskis a year, is broadly diversified and led by the Information Technology industry, with significant contributions from Woodchip Exports, Retail, and Automobile Manufacturing. Average income is 96,325 Vaskis, and evenly distributed, with the richest citizens earning only 3.8 times as much as the poorest.

It turns out that money can buy you happiness, corporations donate huge sums of money to favored politicians, billions of Vaskis are spent to take high-quality photos of the Crow Nebula, and the military is recruiting war criminals to join its weapons research teams. Crime is almost non-existent. Auskerria's national animal is the Crow, which teeters on the brink of extinction due to widespread deforestation, and its national religion is Secularism.

Auskerria is ranked 17,318th in the world and 28th in Novo Brasil for Most Developed, scoring 84.11 on the Human Development Index.