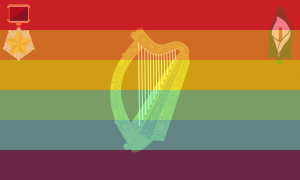 The People's Republic of Bananaistan is a gargantuan, environmentally stunning nation, notable for its museums and concert halls, strictly enforced bedtime, and stringent health and safety legislation. The compassionate, democratic population of 19.628 billion Bananamen hold their civil and political rights very dear, although the wealthy and those in business tend to be viewed with suspicion.

The enormous, outspoken government is primarily concerned with Education, although Healthcare, Environment, and Social Policy are also considered important, while Spirituality and International Aid aren't funded at all. It meets to discuss matters of state in the capital city of Shrone. The average income tax rate is 86.8%, and even higher for the wealthy.

The frighteningly efficient Bananamen economy, worth a remarkable 2,010 trillion Pounds a year, is highly specialized and led by the Book Publishing industry, with major contributions from Tourism and Information Technology. State-owned companies are common. Average income is an impressive 102,405 Pounds, and distributed extremely evenly, with little difference between the richest and poorest citizens.

Graverobbers claim they're acting within the interest of 'scientific preservation', snooze factory is now prison lingo for rehabilitation center, a suspicious number of male students have joined the Ladies' Wrestling League, and editorials that criticize the government are legally obligated to display the "pants on fire" warning. Crime is totally unknown. Bananaistan's national animal is the Ant, which frolics freely in the nation's many lush forests.

Bananaistan is ranked 1,849th in the world and 59th in Forest for Most Beautiful Environments, with 3,457.8 Pounds Of Wildlife Per Square Mile.

Most Recent Government Activity: 43 minutes ago