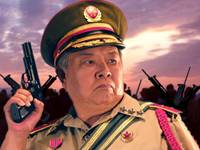 The Republic of China Infantry General is a colossal, safe nation, remarkable for its compulsory military service, state-planned economy, and irreverence towards religion. The hard-nosed, cynical population of 8.97 billion Chinese soldiers are ruled without fear or favor by a psychotic dictator, who outlaws just about everything and refers to the populace as "my little playthings."

The medium-sized, moralistic, well-organized government juggles the competing demands of Defense, Law & Order, and Administration. The average income tax rate is 40.1%, but much higher for the wealthy.

The large but inefficient Chinese economy, worth 404 trillion dollars a year, is driven entirely by a combination of government and state-owned industry, with private enterprise illegal. The industrial sector, which is broadly diversified, is led by the Arms Manufacturing industry, with major contributions from Uranium Mining, Retail, and Door-to-door Insurance Sales. Average income is 45,107 dollars, and evenly distributed, with the richest citizens earning only 2.1 times as much as the poorest.

Truncheon-mounted cameras record the beating of criminals in dynamic HD detail, loans are available for students from poor families, the Hanging Gardens account for half of China Infantry General City's water use, and the military invades any neighboring nation with the gall to criticize its policies. Crime, especially youth-related, is totally unknown, thanks to a well-funded police force and progressive social policies in education and welfare. China Infantry General's national animal is the wolf, which frolics freely in the nation's many lush forests.

China Infantry General is ranked 78,222nd in the world and 21st in The Trunk of a Pontiac Tempest for Highest Average Tax Rates, with 40.09 Effective Tax Rate.