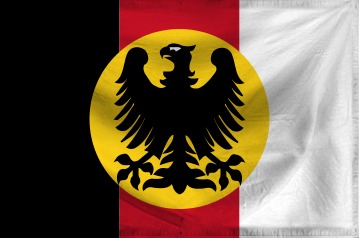 The Most Glorious Dictatorship of Cidonia is a gargantuan, efficient nation, ruled by Viktor Nazar with an even hand, and remarkable for its smutty television, ubiquitous missile silos, and national health service. The hard-nosed, hard-working, humorless population of 31.271 billion Cidonians have some civil rights, but not too many, enjoy the freedom to spend their money however they like, to a point, and take part in free and open elections, although not too often.

The relatively small, corrupt government prioritizes Defense, although Education, Industry, and Healthcare are also considered important, while Spirituality and Environment are ignored. It meets to discuss matters of state in the capital city of Cid City. Citizens pay a flat income tax of 18.5%.

The frighteningly efficient Cidonian economy, worth a remarkable 4,868 trillion Cids a year, is quite specialized and led by the Uranium Mining industry, with major contributions from Information Technology and Book Publishing. Black market activity is extensive. Average income is an impressive 155,690 Cids, with the richest citizens earning 8.6 times as much as the poorest.

People reciting Shakespeare have become a common sight, the country's famous rainforests are being bulldozed by the mining industry, only the rich can afford the latest medical innovations, and the rich tend their gardens inside gated urban farming communities. Crime, especially youth-related, is totally unknown. Cidonia's national animal is the crab-eating macaque, which is also the nation's favorite main course, and its national religion is Atheism.

Cidonia is ranked 116,843rd in the world and 644th in Europe for Largest Agricultural Sector, scoring 949.63 on the Mu-Bah-Daggs Productivity Index.

Most Recent Government Activity: 10 days ago