“Central government is for the weak.” 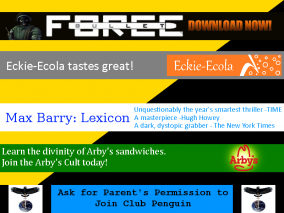 The United Conglomerates of Corporoat is a colossal, cultured nation, ruled by Coffee Machine with a fair hand, and remarkable for its museums and concert halls, sprawling nuclear power plants, and keen interest in outer space. The hard-nosed, hard-working, democratic, humorless, devout population of 7.485 billion Consumers live in a state of perpetual fear, as a complete breakdown of social order has led to the rise of order through biker gangs.

The minute, corrupt, liberal, pro-business, outspoken government, or what there is of one, juggles the competing demands of Industry, Administration, and Education. It meets to discuss matters of state in the capital city of Bargainburg. Income tax is unheard of.

The frighteningly efficient Corporoatian economy, worth a remarkable 3,065 trillion adverts a year, is driven almost entirely by the private sector, which is broadly diversified and led by the Retail industry, with significant contributions from Information Technology, Soda Sales, and Gambling. Average income is an amazing 409,511 adverts, but there is an enormous disparity between incomes, with the richest 10% of citizens earning 2,230,972 per year while the poor average 38,574, a ratio of 57.8 to 1.

Door-to-door salesmen are frequently beaten up by 'vigilantes', tumbleweeds made of litter adorn city streets, psychological disorders are a taboo subject, and Coffee Machine's media campaigns take a hiatus around exam week. Crime, especially youth-related, is so common that it is unusual to encounter someone following the law, perhaps because of the country's complete lack of prisons. Corporoat's national animal is the fur, which teeters on the brink of extinction due to widespread deforestation, and its national religion is Capitalism.

Corporoat is ranked 17,358th in the world and 1st in TopCornion for Most Politically Free, scoring 87.14 on the Diebold Election Inking Scale.