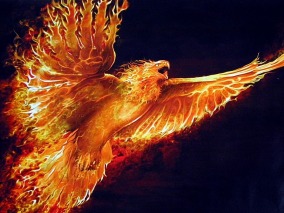 The Combustible Dominion of Flogiston is a gargantuan, efficient nation, remarkable for its barren, inhospitable landscape, complete lack of prisons, and compulsory vegetarianism. The hard-nosed, hard-working, cynical population of 19.408 billion Flogistonians are kept under strict control by the oppressive government, which measures its success by the nation's GDP and refers to individual citizens as "human resources."

The very strong Flogistonian economy, worth 971 trillion sparks a year, is broadly diversified and led by the Gambling industry, with major contributions from Uranium Mining, Soda Sales, and Arms Manufacturing. Average income is 50,046 sparks, and evenly distributed, with the richest citizens earning only 3.1 times as much as the poorest.

Eight year-olds can be seen lighting up in public areas, the government has the power to seize property at will, absentminded citizens frequently converse with hallucinations, and citizens must pay to enjoy Flogiston's pristine beaches. Crime is relatively low, despite the fact that it is difficult to make it through a day without breaking one of the country's many laws. Flogiston's national animal is the firefly, which teeters on the brink of extinction due to widespread deforestation, and its national religion is Pyromania.

Flogiston is ranked 11,276th in the world and 2nd in Bad Science for Most Secular, with 90.48 Atheism Rate.