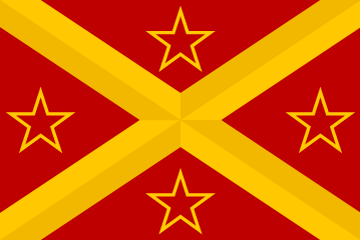 The Commonwealth of Gaeslan 52 is a gargantuan, safe nation, notable for its complete lack of prisons, state-planned economy, and absence of drug laws. The quiet, industrious population of 10.784 billion Icelanders are fiercely patriotic and enjoy great social equality; they tend to view other, more capitalist countries as somewhat immoral and corrupt.

The medium-sized, socially-minded government prioritizes Welfare, although Education, Healthcare, and Defense are also considered important. The average income tax rate is 43.3%, but much higher for the wealthy.

The large but underdeveloped Icelandic economy, worth 383 trillion kronor a year, is driven entirely by a combination of government and state-owned industry, with private enterprise illegal. However, for those in the know, there is a slick, highly efficient, broadly diversified black market in Pizza Delivery, Book Publishing, Woodchip Exports, and Tourism. The private sector mostly consists of enterprising ten-year-olds selling lemonade on the sidewalk, but the government is looking at stamping this out. Average income is 35,526 kronor, and distributed extremely evenly, with little difference between the richest and poorest citizens.

Crime is totally unknown. Gaeslan 52's national animal is the gyrfalcon, which soars majestically through the nation's famously clear skies.

Gaeslan 52 is ranked 44,909th in the world and 1st in Union of Sovereign Socialist Republics for Highest Foreign Aid Spending, scoring 640.46 on the Clooney Contribution Index.