“Answerable to the people, to an extent” King Luke Remington Davis 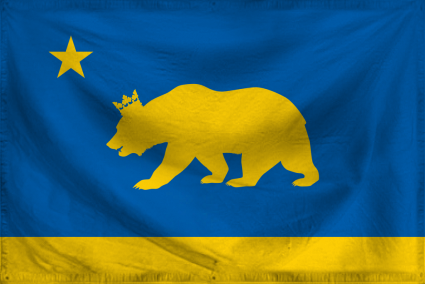 The Constitutional Monarchy of Goldenson is a gargantuan, socially progressive nation, ruled by King Luke Remington Davis with a fair hand, and renowned for its zero percent divorce rate, smutty television, and anti-smoking policies. The compassionate, hard-working, democratic, devout population of 13.183 billion Goldensonians enjoy a sensible mix of personal and economic freedoms, while the political process is open and the people's right to vote held sacrosanct.

The medium-sized, outspoken government juggles the competing demands of Education, Law & Order, and Healthcare. It meets to discuss matters of state in the capital city of Redding. The average income tax rate is 57.8%, and even higher for the wealthy.

The powerhouse Goldensonian economy, worth a remarkable 1,664 trillion California dollars a year, is quite specialized and led by the Information Technology industry, with significant contributions from Retail, Book Publishing, and Arms Manufacturing. State-owned companies are reasonably common. Average income is an impressive 126,237 California dollars, and evenly distributed, with the richest citizens earning only 2.4 times as much as the poorest.

Rumor has it that King Luke Remington Davis has won three lotteries in a row, flipping a coin to make a decision leads to a referral to Gambling Addiction Services, school kids who pretend to drive imaginary cars get a social worker and a police observer assigned to them, and Goldensonian novella fans become unusually flustered when thinking about King Luke Remington Davis. Crime is totally unknown, thanks to a very well-funded police force and progressive social policies in education and welfare. Goldenson's national animal is the California Grizzly, which frolics freely in the nation's many lush forests, and its national religion is Oneness Pentecostalism.

Goldenson is ranked 155,893rd in the world and 10th in California for Highest Foreign Aid Spending, scoring -3.16 on the Clooney Contribution Index.