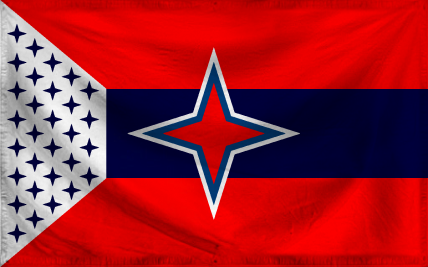 The Federal Union of Hansdeltania is a gargantuan, efficient nation, ruled by President Howard Clemens with an even hand, and notable for its complete lack of prisons, frequent executions, and national health service. The compassionate, hard-working, humorless population of 14.821 billion Hansdeltanians have some civil rights, but not too many, enjoy the freedom to spend their money however they like, to a point, and take part in free and open elections, although not too often.

The medium-sized government juggles the competing demands of Education, Administration, and Defense. It meets to discuss matters of state in the capital city of Hansdelta. The average income tax rate is 68.8%, and even higher for the wealthy.

The frighteningly efficient Hansdeltanian economy, worth a remarkable 2,377 trillion hansdeltanoes a year, is highly specialized and mostly made up of the Arms Manufacturing industry, with significant contributions from Information Technology and Tourism. Average income is an impressive 160,386 hansdeltanoes, and evenly distributed, with the richest citizens earning only 2.1 times as much as the poorest.

Superfoods are often seen as supervillains, supermarket milk is a shear-thickening fluid that can stop small-caliber bullets, the people are famous throughout the region for their perfect yellow teeth, and grade school teachers mark homework with red "CITATION NEEDED" stamps. Crime, especially youth-related, is totally unknown, thanks to a capable police force and progressive social policies in education and welfare. Hansdeltania's national animal is the Hansdeltanian eagle, which soars majestically through the nation's famously clear skies, and its national religion is secular humanism.

Hansdeltania is ranked 112,284th in the world and 13th in The Roleplaying Paradise for Largest Black Market, with 358 billion Standard Monetary Units.

The United Provinces of North America, and