“Could a Mermaid Dream of Being a Human?” 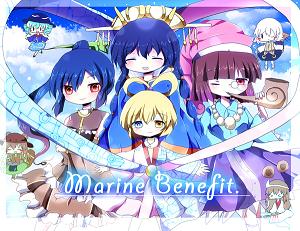 The Marine Benefit of Kaikeidou is a gargantuan, efficient nation, ruled by Mikoto Yaobi with an even hand, and notable for its daily referendums, public floggings, and complete lack of public education. The hard-nosed, hard-working, democratic, humorless, devout population of 10.932 billion Kaikeidouans are free to succeed or fail in life on their own merits; the successful tend to enjoy an opulent (but moralistic) lifestyle, while the failures can be seen crowding out most jails.

The enormous government juggles the competing demands of Spirituality, Environment, and Law & Order. It meets to discuss matters of state in the capital city of Ocean Blessings Hall. Citizens pay a flat income tax of 53.3%.

The all-consuming Kaikeidouan economy, worth 433 trillion yen a year, is highly specialized and led by the Door-to-door Insurance Sales industry, with major contributions from Pizza Delivery, Basket Weaving, and Furniture Restoration. Black market activity is frequent. Average income is 39,679 yen, but there is a vast disparity between incomes, with the richest 10% of citizens earning 275,943 per year while the poor average 1,987, a ratio of 138 to 1.

Customs turn away those considered to have an unfavourable ethnicity, Ocean Blessings Hall's main city thoroughfare has been blocked by a row of leyland cypresses that mysteriously appeared overnight, homeless people can be found sleeping on streets in front of unoccupied second homes, and science labs across the country languish in cobwebs as the government turns its attentions to spiritual matters. Crime, especially youth-related, is relatively low, thanks to the all-pervasive police force. Kaikeidou's national animal is the Vaporeon, which frolics freely in the nation's many lush forests, and its national religion is Blessings of the Sea.

Kaikeidou is ranked 55,325th in the world and 3rd in Last Remote for Highest Average Tax Rates, with 53.27 Effective Tax Rate.