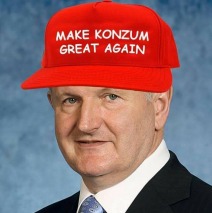 The Shopping Mall Tyranny of Konzum K-plus is a colossal, efficient nation, ruled by Supreme Leader Ivica Todoric with an iron fist, and renowned for its closed borders, otherworldly petting zoo, and sprawling nuclear power plants. The hard-nosed, hard-working, cynical, humorless, devout population of 9.239 billion SLAVES are kept under strict control by the oppressive government, which measures its success by the nation's GDP and refers to individual citizens as "human resources."

The medium-sized, corrupt, moralistic, well-organized government is effectively ruled by the Department of Defense, with Law & Order also on the agenda, while Welfare and Environment aren't funded at all. It meets to discuss matters of state in the capital city of Konzum Shopping Mall. The average income tax rate is 96.7%.

The frighteningly efficient Konzum K-plusian economy, worth a remarkable 4,541 trillion Floggings a year, is driven entirely by a combination of government and state-owned industry, with private enterprise illegal. However, for those in the know, there is an enormous, deeply entrenched, broadly diversified black market in Arms Manufacturing, Uranium Mining, Woodchip Exports, and Information Technology. The private sector mostly consists of enterprising ten-year-olds selling lemonade on the sidewalk, but the government is looking at stamping this out. Average income is an amazing 491,604 Floggings, and evenly distributed, with the richest citizens earning only 4.1 times as much as the poorest.

Citizens are regularly arrested in queues for 'loitering', the military perceives nations hit by natural disasters as "easy pickings", historical commemorations regularly devolve into militaristic jingoism, and Harry Potter books are banned. Crime, especially youth-related, is totally unknown, thanks to a capable police force. Konzum K-plus's national animal is the Salmonella, which teeters on the brink of extinction due to heavy metals seepage into national waterways.

Konzum K-plus is ranked 333rd in the world and 6th in Psychotic Dictatorships for Largest Black Market, with 7,186 trillion Standard Monetary Units.