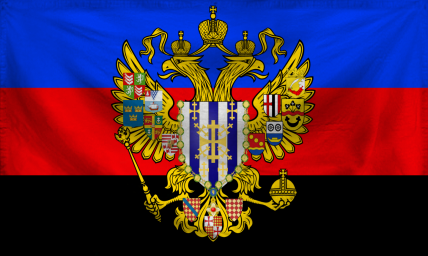 The Empire of Lordmoria is a massive, orderly nation, ruled by Emperor Christopher XVI with an iron fist, and remarkable for its museums and concert halls, unlimited-speed roads, and keen interest in outer space. The hard-nosed, hard-working, cynical, humorless, devout population of 3.187 billion Lordmorians are kept under strict control by the oppressive government, which measures its success by the nation's GDP and refers to individual citizens as "human resources."

The medium-sized, corrupt, moralistic, well-organized government juggles the competing demands of Defense, Law & Order, and Industry. It meets to discuss matters of state in the capital city of St Florentine. Citizens pay a flat income tax of 74.2%.

The frighteningly efficient Lordmorian economy, worth 666 trillion Reichtums a year, is broadly diversified and dominated by the Arms Manufacturing industry, with significant contributions from Information Technology, Woodchip Exports, and Uranium Mining. Black market activity is rampant. Average income is an amazing 209,001 Reichtums, but there is an enormous disparity between incomes, with the richest 10% of citizens earning 1,264,215 per year while the poor average 15,458, a ratio of 81.8 to 1.

Lordmoria is increasingly belligerent on the international stage, the government struggles to keep up with the endless list of petrol disasters, Emperor Christopher XVI claims tax rises are the result of 'curses', and fighter pilots crash out of the air after failing to understand their foreign instruction manuals. Crime, especially youth-related, is totally unknown, thanks to a well-funded police force and progressive social policies in education and welfare. Lordmoria's national animal is the Double Headed Eagle, which teeters on the brink of extinction due to toxic air pollution, and its national religion is Christian Rukethrenism.

Lordmoria is ranked 220,612th in the world and 7th in Imperium Invictorum for Largest Welfare Programs, scoring 104.31 on the Safety Net Mesh Density Rating.