“We are a proud Slavic people who worship lions.” 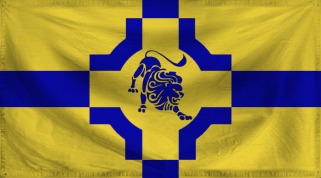 The Slavic nation of Mestoslavakia is a massive, safe nation, remarkable for its compulsory military service and frequent executions. The hard-nosed, hard-working, devout population of 4.043 billion Mestoslavakians have some civil rights, but not too many, enjoy the freedom to spend their money however they like, to a point, and take part in free and open elections, although not too often.

The relatively small government prioritizes Defense, although Spirituality, Law & Order, and Healthcare are also considered important, while International Aid and Welfare receive no funds. It meets to discuss matters of state in the capital city of Slavia. The average income tax rate is 16.0%.

The Mestoslavakian economy, worth 226 trillion Slavinorks a year, is led by the Tourism industry, with significant contributions from Arms Manufacturing, Trout Farming, and Book Publishing. State-owned companies are reasonably common. Average income is 56,027 Slavinorks, and evenly distributed, with the richest citizens earning only 4.5 times as much as the poorest.

Bemused citizens are encouraged to sing foreign-language hymns of religions they have never heard of, war criminals are given full state funerals, government-sponsored gallows are being erected by Violetist temples, and Mr Happy's Funland has just been named Mestoslavakia's new capital. Crime, especially youth-related, is well under control. Mestoslavakia's national animal is the Bear, which frolics freely in the nation's many lush forests.

Mestoslavakia is ranked 47,378th in the world and 3,736th in Chicken overlords for Largest Soda Pop Sector, scoring 2,802.07 on the Addison-Fukk Productivity Rating.