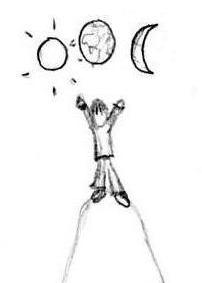 The Fool on the Hill of Neo Nibu is a gargantuan, efficient nation, ruled by The Fool on the Hill with a fair hand, and notable for its unlimited-speed roads, daily referendums, and restrictive gun laws. The hard-nosed, democratic, cheerful, devout population of 31.312 billion Neo Nibuans are free to do what they want with their own bodies, and vote for whomever they like in elections; if they go into business, however, they are regulated to within an inch of their lives.

The large, liberal government is dominated by the Department of Education, although Law & Order, Industry, and Healthcare are also considered important, while Spirituality and Social Policy aren't funded at all. It meets to discuss matters of state in the capital city of The Holy Cloud City Neotopia. The average income tax rate is 93.4%, and even higher for the wealthy.

The frighteningly efficient Neo Nibuan economy, worth a remarkable 5,697 trillion Trav Kharian Gold Coins a year, is driven entirely by a combination of government and state-owned industry, with private enterprise illegal. The industrial sector, which is quite specialized, is dominated by the Book Publishing industry, with significant contributions from Information Technology, Beef-Based Agriculture, and Basket Weaving. Average income is an impressive 181,968 Trav Kharian Gold Coins, and distributed extremely evenly, with practically no difference between the richest and poorest citizens.

Foreign 'investors' have been taking a great interest in the new secret shuttle, houses and businesses are bulldozed to make way for ever-expanding cemeteries, prenuptial contracts have replaced diamond rings in marriage proposals, and prudishness is on the way out. Crime is totally unknown, thanks to a well-funded police force and progressive social policies in education and welfare. Neo Nibu's national animal is the Walrus, which teeters on the brink of extinction due to heavy metals seepage into national waterways, and its national religion is Hippy Love.

Neo Nibu is ranked 126,744th in the world and 4th in Trav khar for Most Average, scoring 30.45 on the Average Standardized Normality Scale.

Most Recent Government Activity: 30 minutes ago