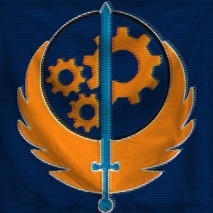 The Dictatorship of Northern Brotherhood of Steel is a colossal, environmentally stunning nation, ruled by Maxson with an even hand, and notable for its museums and concert halls, sprawling nuclear power plants, and ubiquitous missile silos. The hard-nosed, humorless population of 8.937 billion Brotherhood are fiercely patriotic and enjoy great social equality; they tend to view other, more capitalist countries as somewhat immoral and corrupt.

The enormous, corrupt government prioritizes Defense, although Education, Law & Order, and Healthcare are also considered important, while Welfare and Spirituality aren't funded at all. It meets to discuss matters of state in the capital city of Anchorage. The average income tax rate is 92.8%, and even higher for the wealthy.

The frighteningly efficient Brotherhood economy, worth a remarkable 1,458 trillion Caps a year, is driven entirely by a combination of government and state-owned industry, with private enterprise illegal. However, for those in the know, there is a large, well-organized black market in Arms Manufacturing, Information Technology, Tourism, and Book Publishing. The private sector mostly consists of enterprising ten-year-olds selling lemonade on the sidewalk, but the government is looking at stamping this out. Average income is an impressive 163,201 Caps, and distributed extremely evenly, with little difference between the richest and poorest citizens.

Pre-takeoff checks last longer than the flights themselves, there's no cure or sympathy for the common cold, cogitators and mass debaters are skiving off work to hang around the National Symposium Park, and decaying farm hamlets have twice the representation of major urban areas. Crime, especially youth-related, is totally unknown, thanks to a very well-funded police force and progressive social policies in education and welfare. Northern Brotherhood of Steel's national animal is the Radstag, which frolics freely in the nation's many lush forests.

Northern Brotherhood of Steel is ranked 183,268th in the world and 6,783rd in Lazarus for Largest Trout Fishing Sector, scoring -6.2 on the Nemo Depletion Efficiency Index.