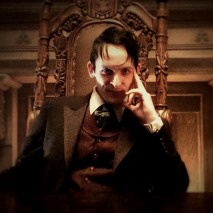 The King of the Underworld of Oswald Chesterfield Cobblepot is a gargantuan, efficient nation, ruled by The Penguin with an iron fist, and remarkable for its multi-spousal wedding ceremonies, enslaved workforce, and frequent executions. The hard-nosed, hard-working, cynical population of 11.507 billion Cobblepots are rabid consumers, partly through choice and partly because the government tells them to and dissenters tend to vanish from their homes at night.

The minute, corrupt, pro-business, well-organized government, or what there is of one, is primarily concerned with Defense, although Education is also considered important, while Spirituality and International Aid aren't funded at all. It meets to discuss matters of state in the capital city of Gotham. Citizens pay a flat income tax of 4.2%.

The thriving a Cobblepot economy, worth 939 trillion Gold Umbrellas a year, is driven almost entirely by the private sector, which is broadly diversified and led by the Gambling industry, with major contributions from Retail, Book Publishing, and Basket Weaving. Average income is 81,647 Gold Umbrellas, but there is a vast disparity between incomes, with the richest 10% of citizens earning 698,492 per year while the poor average 1,651, a ratio of 422 to 1.

Belligerent citizens shoot at passing clouds for 'violating their airspace', government reports are now used to teach toddlers to read, psychological disorders are a taboo subject, and public loudspeakers constantly tell citizens they are "happy people". Crime, especially youth-related, is pervasive, perhaps because of the country's complete lack of prisons. Oswald Chesterfield Cobblepot's national animal is the Penguin, which teeters on the brink of extinction due to heavy metals seepage into national waterways.

Oswald Chesterfield Cobblepot is ranked 181,298th in the world and 3rd in The Iceberg Lounge for Least Corrupt Governments, with 90.48 Percentage Of Bribes Refused.

Most Recent Government Activity: 43 days ago