“Government Sucks. What do you mean I'm the government?”

Location: The Depths of Paradox Space 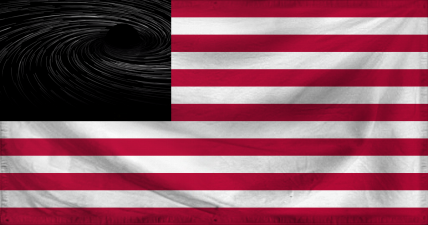 The United States of Paradoxian Liberties is a tiny, socially progressive nation, notable for its compulsory military service, unlimited-speed roads, and soft-spoken computers. The quiet, industrious population of 12 million Paradoxians are fiercely patriotic and enjoy great social equality; they tend to view other, more capitalist countries as somewhat immoral and corrupt.

The relatively small government is primarily concerned with Defense, with Education, Law & Order, and Healthcare also on the agenda, while Spirituality and International Aid aren't funded at all. The average income tax rate is 10.0%, but much higher for the wealthy.

The fair Paradoxian economy, worth 446 billion Dollars a year, is driven entirely by a combination of government and state-owned industry, with private enterprise illegal. However, for those in the know, there is a slick, highly efficient, broadly diversified black market in Information Technology, Automobile Manufacturing, Book Publishing, and Arms Manufacturing. The private sector mostly consists of enterprising ten-year-olds selling lemonade on the sidewalk, but the government is looking at stamping this out. Average income is 37,218 Dollars, and evenly distributed, with the richest citizens earning only 2.2 times as much as the poorest.

Tradesmen will knock 10% off their fees if customers pay cash, water fights now end with thousands dead, politicians are often seen attending regional history classes at primary schools within their constituencies, and when shaking hands with foreign leaders Leader wears an armoured gauntlet. Crime is moderate, with the police force struggling against a lack of funding and a high mortality rate. Paradoxian Liberties's national animal is the Kiwi, which can occasionally be seen sifting through garbage in the nation's cities.

Paradoxian Liberties is ranked 32,210th in the world and 2nd in The Depths of Paradox Space for Least Corrupt Governments, with 94.02 Percentage Of Bribes Refused.