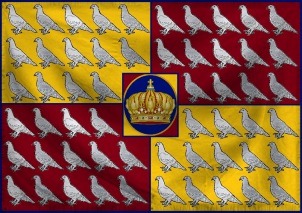 The Imperial Grand Duchy of Pristinian Preserve is a gargantuan, environmentally stunning nation, ruled by Marcus XIV Magnus Dux Imperator with an iron fist, and notable for its free-roaming dinosaurs, vat-grown people, and frequent executions. The hard-nosed, cynical, humorless population of 11.878 billion Preserveans are ruled by a mostly-benevolent dictator, who grants the populace the freedom to live their own lives but watches carefully for anyone to slip up.

The tiny, corrupt, well-organized government juggles the competing demands of Environment, Education, and Defense. It meets to discuss matters of state in the capital city of Baiji. The average income tax rate is 3.3%.

The frighteningly efficient Pristinian Preservean economy, worth a remarkable 2,427 trillion quaggas a year, is driven entirely by a combination of government and state-owned industry, with private enterprise illegal. However, for those in the know, there is a large, well-organized, fairly diversified black market in Tourism, Information Technology, Arms Manufacturing, and Book Publishing. The private sector mostly consists of enterprising ten-year-olds selling lemonade on the sidewalk, but the government is looking at stamping this out. Average income is an amazing 204,382 quaggas, and evenly distributed, with the richest citizens earning only 4.4 times as much as the poorest.

Marcus XIV Magnus Dux Imperator has been known to make speeches in fishing waders, hypochondriacs demand treatment for genetic disorders they don't have, city budgets are spent entirely on supporting the town royalty, and the weather in Baiji is always 'pigeons with a chance of droppings'. Crime is almost non-existent. Pristinian Preserve's national animal is the Passenger Pigeon, which soars majestically through the nation's famously clear skies.

Pristinian Preserve is ranked 220,799th in the world and 8,172nd in Lazarus for Highest Foreign Aid Spending, scoring -13.78 on the Clooney Contribution Index.