“BE NICE OR LEAVE” 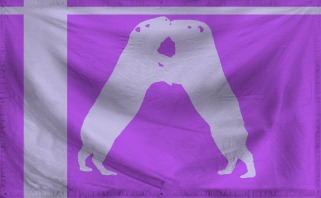 The Most Serene Republic of Purinland is a massive, socially progressive nation, ruled by Paladin Danse with an even hand, and remarkable for its museums and concert halls, keen interest in outer space, and pith helmet sales. The compassionate, democratic population of 4.525 billion Purinlandians are fiercely patriotic and enjoy great social equality; they tend to view other, more capitalist countries as somewhat immoral and corrupt.

The enormous government juggles the competing demands of Education, Healthcare, and Environment. It meets to discuss matters of state in the capital city of New Oxford. The average income tax rate is 81.7%, and even higher for the wealthy.

The thriving Purinlandian economy, worth 363 trillion Purin Pounds a year, is highly specialized and led by the Information Technology industry, with significant contributions from Tourism, Basket Weaving, and Book Publishing. State-owned companies are common. Average income is 80,279 Purin Pounds, and distributed extremely evenly, with practically no difference between the richest and poorest citizens.

Extraordinary tribunals try accused financial criminals, recreational drug businesses are regularly pruned if they grow above the maximum legal size, history textbook pages are used as impromptu tissues by distraught students, and counselors have to sign pledges supporting gay rights before they can speak to any patients. Crime, especially youth-related, is totally unknown, thanks to a capable police force and progressive social policies in education and welfare. Purinland's national animal is the Capybara, which frolics freely in the nation's many lush forests.

Purinland is ranked 5,546th in the world and 203rd in the South Pacific for Least Corrupt Governments, with 95 Percentage Of Bribes Refused.