“Life isn't a question; it doesn't need an answer.” Sargon The Grape 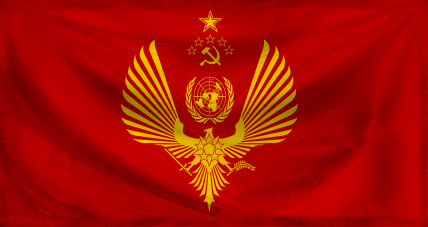 The Cloud Cuckooland of Rhina is a gargantuan, socially progressive nation, ruled by Sargon The Grape with an even hand, and renowned for its frequent executions, feral children, and spontaneously combusting cars. The hard-nosed, hard-working, humorless, devout population of 15.221 billion Rhinese enjoy some of the most opulent lifestyles in the region, unless they are unemployed or working-class, in which case they are variously starving to death or crippled by easily preventable diseases.

The tiny, corrupt, liberal government prioritizes Education, although Industry and Healthcare are also considered important, while Social Policy and Environment are ignored. It meets to discuss matters of state in the capital city of Akkad. Citizens pay a flat income tax of 5.9%.

The frighteningly efficient Rhinese economy, worth a remarkable 2,026 trillion liens a year, is fairly diversified and led by the Information Technology industry, with significant contributions from Uranium Mining, Arms Manufacturing, and Gambling. Black market activity is notable. Average income is an impressive 133,134 liens, but there is a significant disparity between incomes, with the richest 10% of citizens earning 418,808 per year while the poor average 32,381, a ratio of 12.9 to 1.

Sargon The Grape has been seen stealthily slicing fifths off bread loaves, a shipwreck is everyone's fault but the captain's, movie references are legally admissible in court, and Rhinese husbands are dead good at fathering kids. Crime is pervasive, probably because of the absence of a police force. Rhina's national animal is the Grimm, which is also the nation's favorite main course, and its national religion is The New Faith.

Rhina is ranked 114,964th in the world and 27th in New Hyperion for Highest Unexpected Death Rate, scoring 29.32 on the Bus Surprisal Index.