“People of the Golden Sun” 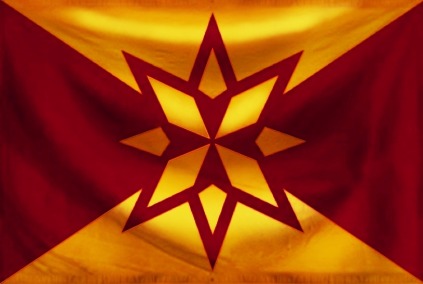 The Communalate of Selu-Ahare is a massive, socially progressive nation, ruled by Sed-Il Ahare with a fair hand, and renowned for its museums and concert halls, punitive income tax rates, and restrictive gun laws. The compassionate, democratic, devout population of 3.245 billion Seluans are free to do what they want with their own bodies, and vote for whomever they like in elections; if they go into business, however, they are regulated to within an inch of their lives.

It is difficult to tell where the omnipresent, liberal, socially-minded, outspoken government stops and the rest of society begins, but it juggles the competing demands of Administration, Healthcare, and Welfare. It meets to discuss matters of state in the capital city of Sali. The average income tax rate is 83.8%, and even higher for the wealthy.

The sizeable but underdeveloped Selu-Aharean economy, worth 96.2 trillion Silvons a year, is driven almost entirely by government activity, with private enterprise illegal. The industrial sector, which is highly specialized, is led by the Automobile Manufacturing industry, with major contributions from Door-to-door Insurance Sales, Book Publishing, and Gambling. State-owned companies are the norm. Average income is 29,660 Silvons, and distributed extremely evenly, with practically no difference between the richest and poorest citizens.

Sleeping on the job is recommended, all mothers are allowed six months fully-paid maternity leave, Sed-Il Ahare has just been declared ruler of Selu-Ahare in an international press conference, and the government has declined to declare any particular religion as its 'official' one. Crime is totally unknown, thanks to a capable police force and progressive social policies in education and welfare. Selu-Ahare's national animal is the Sheep, which frolics freely in the nation's many lush forests.