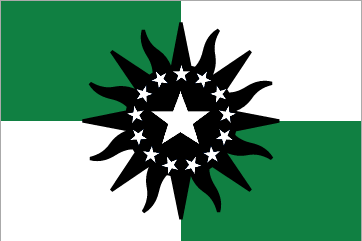 The United Provinces of Skartok is a gargantuan, efficient nation, ruled by President William Stacey Padmore with a fair hand, and notable for its public floggings, unlimited-speed roads, and complete absence of social welfare. The hard-nosed, hard-working, democratic, cheerful, devout population of 18.37 billion Skartokians are effectively ruled by a group of massive corporations, who run for political office and provide their well-off citizens with world-class goods and services. Their poorer citizens, however, are mostly starving to death while being urged to go out and get real jobs. The populace has reasonably extensive civil rights, although these are mostly aimed at allowing them to buy whatever they like.

The minute, pro-business, outspoken government, or what there is of one, juggles the competing demands of Defense, Education, and Public Transport. It meets to discuss matters of state in the capital city of Bahqi's Crossing. Income tax is unheard of.

The powerhouse Skartokian economy, worth a remarkable 3,136 trillion Skartokian riyals a year, is driven almost entirely by the private sector, which is broadly diversified and led by the Gambling industry, with significant contributions from Retail, Arms Manufacturing, and Soda Sales. Average income is an impressive 170,733 Skartokian riyals, but there is a large disparity between incomes, with the richest 10% of citizens earning 871,914 per year while the poor average 18,404, a ratio of 47.4 to 1.

Animal Liberationists are regularly jailed, an increasing number of animal species are named 'Bob', the nation is now proudly cholera-free, and citizens have a tough time telling the difference between jeans and genes. Crime is pervasive, with the police force struggling against a lack of funding and a high mortality rate. Skartok's national animal is the Parrot, which is also the nation's favorite main course, and its national religion is Polatilianism.

Skartok is ranked 192,974th in the world and 27th in Teremara for Most Advanced Law Enforcement, scoring 523.97 on the Orwell Orderliness Index.

Most Recent Government Activity: 18 hours ago