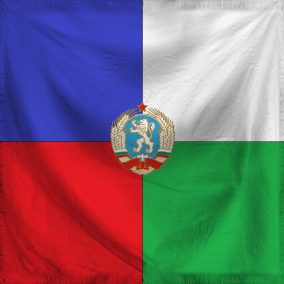 The People's Republic of Slavotopia is a massive, cultured nation, ruled by Tsar Blak Geca with an even hand, and renowned for its frequent executions, complete lack of prisons, and compulsory military service. The compassionate population of 3.331 billion Slavs are fiercely patriotic and enjoy great social equality; they tend to view other, more capitalist countries as somewhat immoral and corrupt.

The large, socially-minded government juggles the competing demands of Administration, Education, and Defense. It meets to discuss matters of state in the capital city of Novo Nachalo. The average income tax rate is 91.4%, and even higher for the wealthy.

The frighteningly efficient Slavic economy, worth 553 trillion stups a year, is driven entirely by a combination of government and state-owned industry, with private enterprise illegal. The industrial sector, which is fairly diversified, is led by the Information Technology industry, with significant contributions from Arms Manufacturing, Book Publishing, and Tourism. Average income is an impressive 166,176 stups, and distributed extremely evenly, with practically no difference between the richest and poorest citizens.

Collisions between bicycles and carnival floats are on the rise, the seats at the back of the parliament are reserved for indigenous ministers, the nation's infamous rickshaw ambulances often double as hearses, and the most penniless demographics have by far the highest number of researchers per capita. Crime, especially youth-related, is totally unknown, thanks to a capable police force and progressive social policies in education and welfare. Slavotopia's national animal is the ant, which is also the nation's favorite main course, and its national religion is Orthodoxy.

Slavotopia is ranked 7,836th in the world and 4th in OmniOne for Most Scientifically Advanced, scoring 451.05 on the Kurzweil Singularity Index.