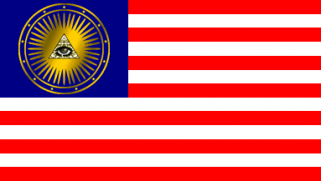 The Federal Military Republic of South Waterford is a colossal, orderly nation, ruled by General Harman Teasedale with an iron fist, and notable for its museums and concert halls, unlimited-speed roads, and punitive income tax rates. The hard-nosed, hard-working, cynical, devout population of 8.65 billion Waterfordians are ruled by a mostly-benevolent dictator, who grants the populace the freedom to live their own lives but watches carefully for anyone to slip up.

The medium-sized, corrupt government is dominated by the Department of Defense, with Law & Order, Education, and Healthcare also on the agenda, while International Aid and Spirituality aren't funded at all. It meets to discuss matters of state in the capital city of Potsdam. The average income tax rate is 56.2%, and even higher for the wealthy.

The all-consuming South Waterfordian economy, worth a remarkable 1,227 trillion Vyrkar Dollars a year, is dominated by the Arms Manufacturing industry, with significant contributions from Information Technology and Retail. Black market activity is rampant. State-owned companies are reasonably common. Average income is an impressive 141,877 Vyrkar Dollars, and evenly distributed, with the richest citizens earning only 2.0 times as much as the poorest.

The military refers to helpless combatants offering surrender as "sitting ducks", a milk bath costs more than bathing in money, giggling teens are asked to put their mouths on rubber dolls, and glancing at the car radio display while driving is treated as attempted homicide. Crime, especially youth-related, is totally unknown, thanks to a well-funded police force and progressive social policies in education and welfare. South Waterford's national animal is the Chinese Pug, which frolics freely in the nation's many lush forests, and its national religion is Church of the Holy Light.

South Waterford is ranked 196,203rd in the world and 53rd in Union of Allied States for Most Secular, with 14.27 Atheism Rate.