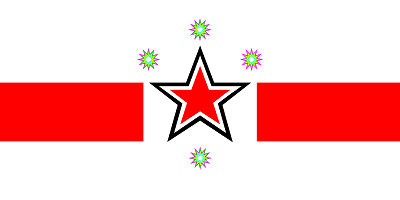 The Haderanian Polity of Star City is a gargantuan, cultured nation, remarkable for its frequent executions, compulsory military service, and national health service. The compassionate, democratic, cheerful population of 40.977 billion Sideroi are fiercely patriotic and enjoy great social equality; they tend to view other, more capitalist countries as somewhat immoral and corrupt.

The large, socially-minded government juggles the competing demands of Environment, Education, and Social Policy. It meets to discuss matters of state in the capital city of Star City. The income tax rate is 100%.

The enormous but underdeveloped Sidereal economy, worth a remarkable 5,225 trillion Very-Fungible Tokens a year, is driven almost entirely by government activity, with private enterprise illegal. The industrial sector is mostly comprised of enterprising ten-year-olds selling lemonade on the sidewalk, although the government is looking at stamping this out. Average income is an impressive 127,523 Very-Fungible Tokens, and distributed extremely evenly, with practically no difference between the richest and poorest citizens.

Pet loving officers arrest citizens who don't give their dogs enough biscuits, citizens are expected to be proficient in at least five languages, the volume of paperwork used to complete a single environmental assessment defeats the purpose, and arbitrary election rules are considered sacrosanct. Crime is totally unknown, thanks to a very well-funded police force and progressive social policies in education and welfare. Star City's national animal is the Utahraptor, which frolics freely in the nation's many lush forests.

Star City is ranked 3,186th in the world and 3rd in The Proletariat Coalition for Most Inclusive, scoring 285.61 on the Mandela-Wollstonecraft Non-Discrimination Index.