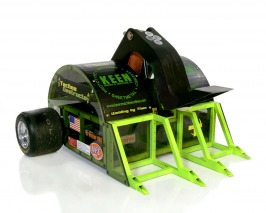 The Republic of Techno Destructo is a colossal, cultured nation, remarkable for its barren, inhospitable landscape, compulsory military service, and pith helmet sales. The hard-nosed, hard-working, cynical population of 9.93 billion Techno Destructoans are kept under strict control by the oppressive government, which measures its success by the nation's GDP and refers to individual citizens as "human resources."

The medium-sized, well-organized government juggles the competing demands of Defense, Law & Order, and Administration. The average income tax rate is 25.7%, but much higher for the wealthy.

The Techno Destructoan economy, worth 532 trillion guilders a year, is led by the Arms Manufacturing industry, with major contributions from Uranium Mining, Information Technology, and Woodchip Exports. State-owned companies are reasonably common. Average income is 53,627 guilders, and evenly distributed, with the richest citizens earning only 2.2 times as much as the poorest.

Every political office comes fitted with a typewriter and an old filing cabinet, women complaining about lack of opportunity are told to "man up", foreign governments are threatened if they so much as mention the word "election", and dynamite sales and concert audiences are booming. Crime, especially youth-related, is totally unknown, thanks to a well-funded police force and progressive social policies in education and welfare. Techno Destructo's national animal is the cow, which can occasionally be seen sifting through garbage in the nation's cities.

Techno Destructo is ranked 208,035th in the world and 33rd in The Trunk of a Pontiac Tempest for Largest Cheese Export Sector, scoring -6.87 on the Mozzarella Productivity Index.