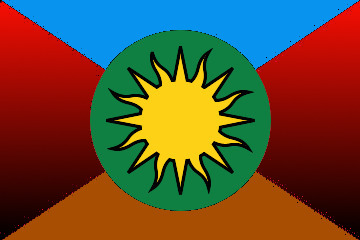 The Badlands Beyond The Brink of The Bizarre is a gargantuan, cultured nation, ruled by Ernest Mann with a fair hand, and remarkable for its museums and concert halls, strictly enforced bedtime, and multi-spousal wedding ceremonies. The compassionate, democratic, cheerful, devout population of 21.016 billion Bizarroes are free to do what they want with their own bodies, and vote for whomever they like in elections; if they go into business, however, they are regulated to within an inch of their lives.

The government — a sprawling, bureaucracy-choked, outspoken morass — prioritizes Education, although Social Policy, Environment, and Healthcare are also considered important, while Spirituality and Law & Order aren't funded at all. It meets to discuss matters of state in the capital city of Down Town. The average income tax rate is 93.3%, and even higher for the wealthy.

The powerhouse Bizarrean economy, worth a remarkable 1,973 trillion Time Credits a year, is driven almost entirely by government activity. The industrial sector is solely comprised of the Book Publishing industry. State-owned companies are reasonably common. Average income is 93,884 Time Credits, and distributed extremely evenly, with practically no difference between the richest and poorest citizens.

Mantis shrimp studies is academia's fastest growing field, planespotters are emigrating in droves, Members of Parliament are often found living in cardboard boxes, and the moose is protected from hunting and slowly coming back from the brink of extinction. Crime, especially youth-related, is pervasive, probably because of the absence of a police force. The Bizarre's national animal is the moose, which frolics freely in the nation's many lush forests, and its national religion is Bizarrism.

The Bizarre is ranked 6,700th in the world and 2nd in The Illuminati for Largest Populations, with 21.0 billion Capita.