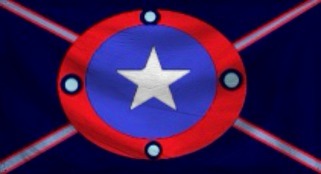 The Peoples Federation of The Campbell Nation is a gargantuan, orderly nation, ruled by Chancellor Macquarie with an iron fist, and renowned for its rampant corporate plagiarism, compulsory military service, and stringent health and safety legislation. The compassionate, cynical, cheerful population of 22.771 billion Campbellish are proud of their wide-ranging civil freedoms, and those who aren't tend to be dragged off the streets by men in dark suits and hustled into cars with tinted windows.

The large, corrupt, well-organized government juggles the competing demands of Defense, Education, and Healthcare. It meets to discuss matters of state in the capital city of Campbell City. The income tax rate is 100%.

The frighteningly efficient Campbellish economy, worth an astonishing 10,676 trillion Merits a year, is driven entirely by a combination of government and state-owned industry, with private enterprise illegal. The industrial sector, which is fairly diversified, is mostly made up of the Information Technology industry, with significant contributions from Arms Manufacturing, Beef-Based Agriculture, and Furniture Restoration. Average income is an amazing 468,846 Merits, and distributed extremely evenly, with little difference between the richest and poorest citizens.

The The Campbell Nation Automotive Racing Series draws millions of spectators annually while those near the tracks complain about the noise, droves of former desperados are applying to join the border police, handling people's data is proving an immersive experience, and leather-clad individuals can be seen walking their slaves in public parks. Crime, especially youth-related, is totally unknown. The Campbell Nation's national animal is the Boar, which is also the nation's favorite main course.

The Campbell Nation is ranked 563rd in the world and 6th in Forest for Largest Welfare Programs, scoring 14,248.42 on the Safety Net Mesh Density Rating.