“Gold In Peace, Iron In War”

Location: The City Of San Francisco

The City Of San Francisco 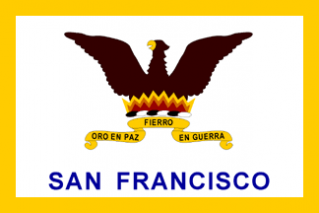 The Independent Nation of The City Of San Francisco is a colossal, safe nation, ruled by Ed Lee with a fair hand, and renowned for its frequent executions, national health service, and digital currency. The compassionate, hard-working, democratic, cheerful population of 6.507 billion San Franciscans enjoy a sensible mix of personal and economic freedoms, while the political process is open and the people's right to vote held sacrosanct.

The medium-sized government juggles the competing demands of Education, Environment, and Industry. It meets to discuss matters of state in the capital city of San Francisco. The average income tax rate is 85.8%.

The frighteningly efficient City Of San Franciscoan economy, worth a remarkable 1,047 trillion dollars a year, is fairly diversified and led by the Information Technology industry, with major contributions from Tourism, Book Publishing, and Trout Farming. State-owned companies are reasonably common. Average income is an impressive 161,047 dollars, and evenly distributed, with the richest citizens earning only 3.2 times as much as the poorest.

The state pays for care of easily preventable illnesses, heavy industry must go to expensive lengths to dispose of waste, businesses often fire workers in favour of cheaper automatic systems, and everyone wants to be on the guest list for diplomatic parties. Crime, especially youth-related, is totally unknown. The City Of San Francisco's national animal is the seal, which frolics freely in the nation's sparkling oceans, and its national religion is Paganism.