“All For The Greater Good.” 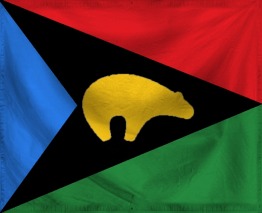 The Dominion of The Dezreik is a colossal, genial nation, ruled by 'Ursa Major' Wheldrake with an even hand, and notable for its soft-spoken computers, compulsory military service, and restrictive gun laws. The compassionate population of 8.467 billion Dezreikians are fiercely patriotic and enjoy great social equality; they tend to view other, more capitalist countries as somewhat immoral and corrupt.

The enormous, socially-minded government juggles the competing demands of Education, Administration, and Environment. It meets to discuss matters of state in the capital city of Beornisgate. The average income tax rate is 98.2%.

The frighteningly efficient Dezreikian economy, worth a remarkable 1,546 trillion Bobs a year, is driven entirely by a combination of government and state-owned industry, with private enterprise illegal. The industrial sector, which is quite specialized, is mostly made up of the Information Technology industry, with significant contributions from Tourism and Beef-Based Agriculture. Average income is an impressive 182,701 Bobs, and distributed extremely evenly, with practically no difference between the richest and poorest citizens.

Traffic cops spend most of their work-hours calculating citizens' monthly income, handling people's data is proving an immersive experience, refugees from other nations are flocking to The Dezreik's border, and signs at the border tell international drivers where they can put their cars. Crime, especially youth-related, is totally unknown, thanks to a well-funded police force and progressive social policies in education and welfare. The Dezreik's national animal is the Bear, which frolics freely in the nation's many lush forests, and its national religion is Science.

The Dezreik is ranked 3,794th in the world and 12th in International Democratic Union for Smartest Citizens, with 144.74 quips per hour.