“For the Greater Good of all Lifeforms.” 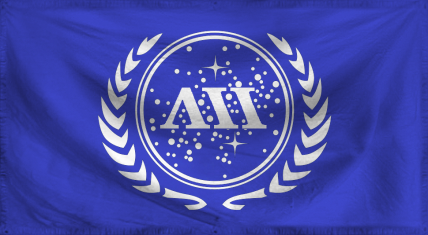 The Cosmopolitan State of The IGER Civilization is a gargantuan, environmentally stunning nation, ruled by the SRI Command Authority with a fair hand, and notable for its multi-spousal wedding ceremonies, rampant corporate plagiarism, and ubiquitous missile silos. The compassionate, democratic, cheerful population of 17.927 billion Citizens of the IGER are free to do what they want with their own bodies, and vote for whomever they like in elections; if they go into business, however, they are regulated to within an inch of their lives.

The enormous, liberal, socially-minded, outspoken government juggles the competing demands of Education, Defense, and Administration. It meets to discuss matters of state in the capital city of Visp on Planet Earth. The income tax rate is 100%.

The frighteningly efficient IGER economy, worth a remarkable 8,573 trillion IGER-Credits a year, is driven entirely by a combination of government and state-owned industry, with private enterprise illegal. The industrial sector, which is quite specialized, is mostly made up of the Information Technology industry, with significant contributions from Tourism, Arms Manufacturing, and Book Publishing. Average income is an amazing 478,267 IGER-Credits, and distributed extremely evenly, with practically no difference between the richest and poorest citizens.

Frequent fliers are obliged to submit to invasive security procedures by government security, the nation's generous tax credits have brought all the film studios to the yard, there is a growing belief that mothers love their children more than fathers, and jokes told in elementary school often come back to haunt politicians. Crime is totally unknown, thanks to a well-funded police force and progressive social policies in education and welfare. The IGER Civilization's national animal is the genetically reconstructed Mammoth, which frolics freely in the nation's many lush forests, and its national religion is scienctific atheism.

The IGER Civilization is ranked 304,792nd in the world and 4th in SICON for Highest Unexpected Death Rate, scoring 12.95 on the Bus Surprisal Index.