“All Pokémon exist for Team Rocket!” 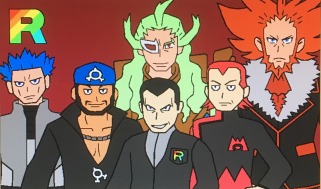 The Rogue Nation of The Pokemon Dystopia is a colossal, orderly nation, renowned for its barren, inhospitable landscape, compulsory military service, and spontaneously combusting cars. The hard-nosed, hard-working, cynical population of 6.55 billion Pokemon Dystopians are rabid consumers, partly through choice and partly because the government tells them to and dissenters tend to vanish from their homes at night.

The minute, pro-business, well-organized government, or what there is of one, juggles the competing demands of Law & Order, Defense, and Industry. Citizens pay a flat income tax of 4.7%.

The strong Pokemon Dystopian economy, worth 435 trillion Pokémons a year, is driven almost entirely by the private sector, which is broadly diversified and led by the Gambling industry, with significant contributions from Automobile Manufacturing, Arms Manufacturing, and Pizza Delivery. Average income is 66,463 Pokémons, but there is a vast disparity between incomes, with the richest 10% of citizens earning 428,359 per year while the poor average 4,166, a ratio of 102 to 1.

Crime is a problem. The Pokemon Dystopia's national animal is the Mewtwo, which teeters on the brink of extinction due to widespread deforestation.

The Pokemon Dystopia is ranked 146,595th in the world and 4th in End 500 for Most Developed, scoring 52.6 on the Human Development Index.