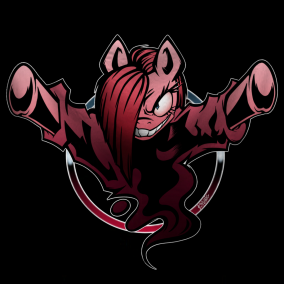 The Homocidal nation of The Psycho Pink Pony is a massive, safe nation, ruled by Cannibal pony with an even hand, and notable for its frequent executions, compulsory vegetarianism, and restrictive gun laws. The hard-nosed population of 4.06 billion Psychopaths are highly moralistic and fiercely conservative, in the sense that they tend to believe most things should be outlawed. People who have good jobs and work quietly at them are lauded; others are viewed with suspicion.

The enormous, moralistic government juggles the competing demands of Defense, Law & Order, and Administration. It meets to discuss matters of state in the capital city of Psychosis. The average income tax rate is 73.1%.

The large but inefficient Lulamoonian economy, worth 195 trillion Cupcakes a year, is driven entirely by a combination of government and state-owned industry, with private enterprise illegal. The industrial sector, which is quite specialized, is led by the Arms Manufacturing industry, with major contributions from Uranium Mining and Information Technology. Average income is 48,065 Cupcakes, and evenly distributed, with the richest citizens earning only 4.6 times as much as the poorest.

An increasing number of citizens believe the world is flat, a popular phrase is "eat, drink and be merry for tomorrow we eat, drink and be merry some more", the government's giant servers are often used as a tourist trap, and many politicians are serving jail time for minor drug offenses. Crime, especially youth-related, is totally unknown, thanks to a very well-funded police force and progressive social policies in education and welfare. The Psycho Pink Pony's national animal is the Cannibal, which can occasionally be seen sifting through garbage in the nation's cities, and its national religion is Pinkie sense.

The Psycho Pink Pony is ranked 211,263rd in the world and 10,886th in Chicken overlords for Largest Agricultural Sector, scoring -9.34 on the Mu-Bah-Daggs Productivity Index.