“Equality at all Costs” the Most Serene Empress Irene I 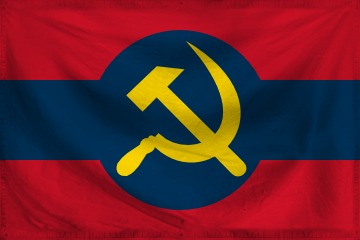 The Collectivist Empire of United Technocratia is a gargantuan, genial nation, ruled by the Most Serene Empress Irene I with an even hand, and notable for its frequent executions, complete lack of prisons, and anti-smoking policies. The compassionate, cheerful population of 13.039 billion Technocrats are fiercely patriotic and enjoy great social equality; they tend to view other, more capitalist countries as somewhat immoral and corrupt.

The enormous, socially-minded government juggles the competing demands of Education, Environment, and Healthcare. It meets to discuss matters of state in the capital city of Irenestadt. The income tax rate is 100%.

The frighteningly efficient Technocratian economy, worth a remarkable 3,696 trillion People's denarii a year, is driven entirely by a combination of government and state-owned industry, with private enterprise illegal. The industrial sector, which is quite specialized, is led by the Information Technology industry, with major contributions from Tourism and Book Publishing. Average income is an amazing 283,482 People's denarii, and distributed extremely evenly, with practically no difference between the richest and poorest citizens.

Cotton candy made from genuine cotton cellulose doesn't quite satisfy, airplanes have giant grilles on their noses to knock drones out of their path, shoppers have literally had their hands full since plastic bags were banned, and politicians preface their speeches with a declaration that any resemblance to speeches given by individuals living or dead is purely coincidental. Crime is totally unknown, thanks to a capable police force and progressive social policies in education and welfare. United Technocratia's national animal is the barn owl, which soars majestically through the nation's famously clear skies.

United Technocratia is ranked 222,890th in the world and 10,027th in The North Pacific for Largest Gambling Industry, scoring -17.06 on the Kelly Criterion Productivity Index.