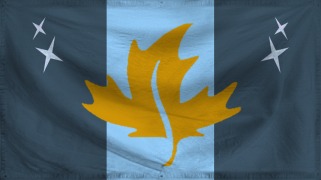 The Free Lands of Vancouvia is a gargantuan, socially progressive nation, notable for its smutty television, complete lack of prisons, and punitive income tax rates. The compassionate, democratic population of 13.13 billion Vancouvians love a good election, and the government gives them plenty of them. Universities tend to be full of students debating the merits of various civil and political rights, while businesses are tightly regulated and the wealthy viewed with suspicion.

The enormous, outspoken government juggles the competing demands of Education, Industry, and Healthcare. It meets to discuss matters of state in the capital city of Vesuvius. The income tax rate is 100%.

The frighteningly efficient Vancouvian economy, worth a remarkable 2,841 trillion coves a year, is driven entirely by a combination of government and state-owned industry, with private enterprise illegal. The industrial sector, which is quite specialized, is mostly made up of the Information Technology industry, with significant contributions from Book Publishing. Average income is an amazing 216,448 coves, and distributed extremely evenly, with little difference between the richest and poorest citizens.

Tourists need only sign on the dotted line to become citizens, the Party has more splits than a yo-yo dieter's trousers, prospective parents are cheering on the streets as they no longer need a license to have children, and Leader's Twitcher account is typically used to share wild cow memes rather than government policy. Crime is totally unknown, thanks to a well-funded police force and progressive social policies in education and welfare. Vancouvia's national animal is the wild cow, which frolics freely in the nation's many lush forests.