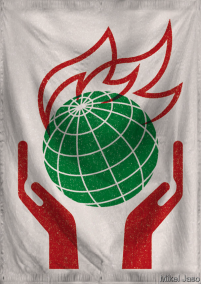 The large, liberal government juggles the competing demands of Healthcare, Defense, and Law & Order. The average income tax rate is 41.0%, but much higher for the wealthy.

The World Assembly Administered Territorian economy, worth 43.7 trillion WA dollars a year, is quite specialized and led by the Tourism industry, with major contributions from Retail, Pizza Delivery, and Gambling. State-owned companies are reasonably common. Average income is 34,840 WA dollars, and distributed extremely evenly, with little difference between the richest and poorest citizens.

Crime is almost non-existent, thanks to a well-funded police force and progressive social policies in education and welfare. World Assembly Administered Territory's national animal is the WAlrus, which frolics freely in the nation's sparkling oceans.

World Assembly Administered Territory is ranked 130,056th in the world and 35th in Entropy for Most Secular, with 17.16 Atheism Rate.