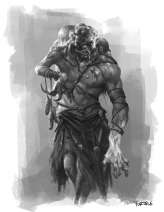 The Bony Theocracy of Yurtrus is a massive, cultured nation, remarkable for its barren, inhospitable landscape, ubiquitous missile silos, and free-roaming dinosaurs. The hard-nosed, cynical, devout population of 4.759 billion Yurtrusians are kept under strict control by the oppressive government, which measures its success by the nation's GDP and refers to individual citizens as "human resources."

The medium-sized, corrupt, well-organized government juggles the competing demands of Administration, Defense, and Law & Order. It meets to discuss matters of state in the capital city of UndergroundCity. The average income tax rate is 22.7%.

The Yurtrusian economy, worth 277 trillion White Powders a year, is fairly diversified and led by the Arms Manufacturing industry, with significant contributions from Gambling, Retail, and Uranium Mining. Black market activity is extensive. Average income is 58,206 White Powders, with the richest citizens earning 5.1 times as much as the poorest.

Politicians are often seen drinking soft drinks at the end of every public address, the nation has recently been attributed to the funding of terrorist organisations, citizens drive tank-like vehicles with mounted machine guns, and in government offices a hidden killer takes the lives of ministers and civil servants. Crime, especially youth-related, is a problem, possibly because it is difficult to make it through a day without breaking one of the country's many regulations. Yurtrus's national animal is the Vulture, which teeters on the brink of extinction due to toxic air pollution.

Yurtrus is ranked 61,740th in the world and 1st in the Boneyard for Largest Soda Pop Sector, scoring 2,087.48 on the Addison-Fukk Productivity Rating.

Most Recent Government Activity: 19 minutes ago