“Logic is blind and often knows only its own past” 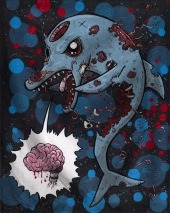 The Republic of Zombiedolphins is a gargantuan, cultured nation, ruled by Big Daddy with a fair hand, and remarkable for its museums and concert halls, anti-smoking policies, and stringent health and safety legislation. The compassionate, democratic, cheerful, devout population of 36.73 billion Zombiedolphinsians hold their civil and political rights very dear, although the wealthy and those in business tend to be viewed with suspicion.

The large, outspoken government juggles the competing demands of Education, Environment, and Healthcare. It meets to discuss matters of state in the capital city of Rotten Corpse. The average income tax rate is 98.0%.

The frighteningly efficient Zombiedolphinsian economy, worth a remarkable 8,370 trillion serenas a year, is highly specialized and mostly made up of the Tourism industry, with significant contributions from Book Publishing. State-owned companies are common. Average income is an amazing 227,881 serenas, and distributed extremely evenly, with little difference between the richest and poorest citizens.

Hidden bedroom-cams are installed to catch mothers doing their kids' homework, veterans are directed into environmental cleanup operations, it takes months to get the proper permits for a child's first tricycle, and citizens select which government department gets their income tax serenas each year. Crime is totally unknown. Zombiedolphins's national animal is the icelandic bargehound, which frolics freely in the nation's many lush forests.

Zombiedolphins is ranked 548th in the world and 2nd in Loamhedge for Least Corrupt Governments, with 98.18 percentage of bribes refused.