“Down with Big Brother!” 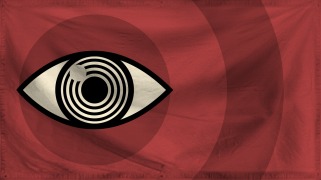 The Unrepublic of Orwellian Observers is a massive, socially progressive nation, ruled by Big Brother with a fair hand, and notable for its barren, inhospitable landscape, keen interest in outer space, and sprawling nuclear power plants. The hard-nosed, hard-working, democratic, humorless population of 4.99 billion Orwellian Observersians live in a state of perpetual fear, as a complete breakdown of social order has led to the rise of order through biker gangs.

The minute, corrupt, liberal, pro-business, outspoken government, or what there is of one, is primarily concerned with Industry, with Administration also on the agenda, while Law & Order and Environment are ignored. It meets to discuss matters of state in the capital city of Airstrip One. Income tax is unheard of.

The frighteningly efficient Orwellian Observersian economy, worth a remarkable 1,202 trillion thought crimes a year, is driven almost entirely by the private sector, which is broadly diversified and led by the Retail industry, with significant contributions from Soda Sales, Information Technology, and Gambling. Average income is an amazing 241,079 thought crimes, but there is an enormous disparity between incomes, with the richest 10% of citizens earning 1,282,050 per year while the poor average 23,908, a ratio of 53.6 to 1.

Tourists are flocking to the newly-built MeteorLand family resort, orthopaedics patients often have a bounce in their step, vats of anabolic steroids are being dumped into the ocean to make Orwellian Observersian mussels the biggest in Oceania, and woodcutter axes are cited as the most common cause of death amongst Chestnut Trees. Crime, especially youth-related, is so common that it is unusual to encounter someone following the law, perhaps because of the country's complete lack of prisons. Orwellian Observers's national animal is the Chestnut Tree, which is also the nation's favorite main course, and its national religion is INGSOC.

Orwellian Observers is ranked 14,135th in the world and 3rd in Oceania for Largest Agricultural Sector, scoring 6,200.36 on the Mu-Bah-Daggs Productivity Index.