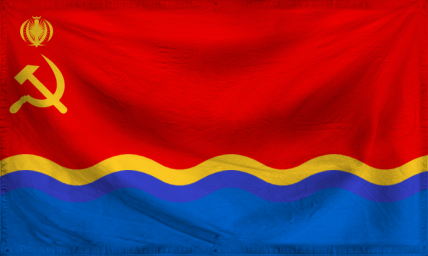 The Socialist Federative State of Molossiania is a colossal, efficient nation, ruled by Bukheil Dobrachuvie Gurbochiev with an even hand, and renowned for its barren, inhospitable landscape, state-planned economy, and daily referendums. The hard-nosed population of 5.972 billion Molossianians have some civil rights, but not too many, enjoy the freedom to spend their money however they like, to a point, and take part in free and open elections, although not too often.

The large, corrupt government prioritizes Defense, with Administration, Education, and Law & Order also on the agenda, while Spirituality and International Aid receive no funds. It meets to discuss matters of state in the capital city of Grand Mroskau. The average income tax rate is 91.3%, and even higher for the wealthy.

The frighteningly efficient Molossianian economy, worth 994 trillion Gregorius Ruble's a year, is driven entirely by a combination of government and state-owned industry, with private enterprise illegal. However, for those in the know, there is a slick, highly efficient, broadly diversified black market in Arms Manufacturing, Information Technology, Uranium Mining, and Book Publishing. The private sector mostly consists of enterprising ten-year-olds selling lemonade on the sidewalk, but the government is looking at stamping this out. Average income is an impressive 166,563 Gregorius Ruble's, and distributed extremely evenly, with little difference between the richest and poorest citizens.

Sales of disinfectant wipes have skyrocketed, screenwriters and actors seem to be in short supply these days, any body part that can be cut off a person is no longer considered to be their property, and Renaissance frescos are being chiselled off public walls. Crime, especially youth-related, is totally unknown, thanks to a well-funded police force and progressive social policies in education and welfare. Molossiania's national animal is the Emperor Penguin, which teeters on the brink of extinction due to heavy metals seepage into national waterways, and its national religion is Secularism.

Molossiania is ranked 6,688th in the world and 415th in The North Pacific for Most Developed, scoring 92.51 on the Human Development Index.