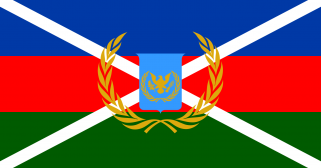 The Democratic States of Josephtan is a colossal, environmentally stunning nation, ruled by President Supreme Clitus Heraclius with a fair hand, and renowned for its compulsory military service, frequent executions, and complete lack of prisons. The compassionate, democratic, cheerful population of 9.25 billion Josephtanians are free to do what they want with their own bodies, and vote for whomever they like in elections; if they go into business, however, they are regulated to within an inch of their lives.

The enormous government juggles the competing demands of Education, Environment, and Administration. It meets to discuss matters of state in the capital city of Olympia. The average income tax rate is 95.8%.

The frighteningly efficient Josephtanian economy, worth a remarkable 1,082 trillion FoxDollars a year, is highly specialized and mostly made up of the Tourism industry, with significant contributions from Book Publishing and Information Technology. State-owned companies are reasonably common. Average income is an impressive 117,070 FoxDollars, and distributed extremely evenly, with little difference between the richest and poorest citizens.

Out-of-work actors say they can't complain, asking 'does my bum look big in this?' leads to 30 hours of self-esteem classes, hospitals fear government fines more than terrorist ransoms, and the nation threatens sanctions on islands only visible at low tide. Crime, especially youth-related, is totally unknown, thanks to a well-funded police force and progressive social policies in education and welfare. Josephtan's national animal is the Fox, which frolics freely in the nation's many lush forests, and its national religion is Spiritism.

Josephtan is ranked 5,147th in the world and 19th in New Western Empire for Most Developed, scoring 93.87 on the Human Development Index.

United Kingdom of the Universe,