“What do you want you Moon-Faced Assassin of Joy?” 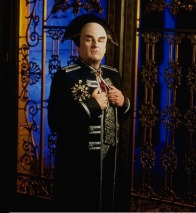 The Burlesque Republic of The Centauri is a gargantuan, efficient nation, ruled by Emperor Jaffa with an iron fist, and notable for its compulsory military service, sprawling nuclear power plants, and aversion to nipples. The hard-nosed, hard-working, cynical, humorless, devout population of 37.935 billion Centauris are rabid consumers, partly through choice and partly because the government tells them to and dissenters tend to vanish from their homes at night.

The minute, corrupt, pro-business government, or what there is of one, juggles the competing demands of Defense, Industry, and Education. It meets to discuss matters of state in the capital city of Centauri Prime. Income tax is unheard of.

The frighteningly efficient Centaurian economy, worth an astonishing 34,987 trillion duckets a year, is driven almost entirely by the private sector, which is broadly diversified and led by the Arms Manufacturing industry, with major contributions from Information Technology, Gambling, and Automobile Manufacturing. Average income is a breathtaking 922,292 duckets, but there is a vast disparity between incomes, with the richest 10% of citizens earning 8,639,914 per year while the poor average 8,281, a ratio of 1,043 to 1.

Citizens complain about a burning sensation after bathing, the ongoing space elevator construction project has elevated the national debt to all new levels, cash-strapped junkies lick rabbits for a cheap high, and Centaurian farm salmon are known for being both horribly diseased and remarkably acrobatic. Crime, especially youth-related, is so common that it is unusual to encounter someone following the law, probably because of the absence of a police force. The Centauri's national animal is the Narn, which is also the nation's favorite main course, and its national religion is the pantheon of fifty deities.

Most Recent Government Activity: 22 days ago